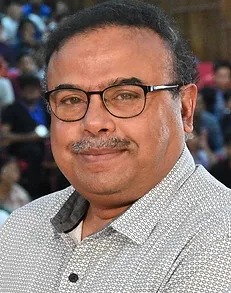 Prof. Anupam Basu was a professor at Department of Computer Science Engineering in IIT Kharagpur and acted as director of NIT, Durgapur. He has taught at University of California, Irvine and University of Guelph, Ontario, Canada as a visiting Professor and have been the Humboldt Fellow at TU Dortmund, Germany. He teaches Computer Architecture, Operating Systems and Embedded Systems IIT. He has also taken Artificial Intelligence, Intelligent Systems and Cognitive Science courses at IITK. 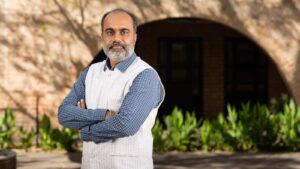 Pankaj Setia (Ph.D., Michigan State University, 2008) is a Professor of Information Systems and Founding Chair of the Center for Digital Transformation at the Indian Institute of Management (IIM) Ahmedabad, India. He has previously taught at the Michigan State University and the University of Arkansas. He was also the executive director of the Ph.D. program and an associate professor at the University of Arkansas, USA. His broader research interests include business analytics and artificial intelligence, IT strategy, digital innovations, neuroscientific theories, computational models of sentiment analysis and IT Governance, and open-source innovations. He has published in the top information systems and business journals in two domains: 1) IT strategy and governance, and 2) Open source software. He has featured among the top 100 researchers in the field of Information Systems worldwide, based on his publications in the top business journals (e.g., the Financial Times top 50 Journals). Also, he has been invited to give research talks or keynote speeches by universities from different countries, such as India, the US, Chile, and Singapore. He teaches graduate-level courses on strategic management of digital innovations at the Indian Institute of Management, Ahmedabad (IIMA). 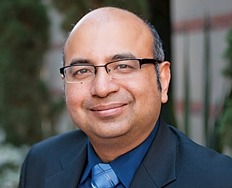 Professor and Chair, Department of Biostatistics,

Dr. Sudipto Banerjee joined UCLA as Professor and Chair of the Department of Biostatistics in 2014. Prior to that, he spent 14 years in the University of Minnesota, Twin Cities. He has done his B.S. (Honours) from Presidency College, Calcutta, India in 1994, followed by M.STAT. from Indian Statistical Institute, Calcutta, India in 1996. Then he completed his Ph.D. degree in Statistics from University of Connecticut, Storrs, Connecticut, USA in 2000. His research centers around spatial statistics, developing theory and methods related to Bayesian modeling and inference for geographic data with wide-ranging applications in public and environmental health sciences, ecology, forestry, real estate economics and agronomy. In 2015, he was awarded with the Distinguished Achievement Medal from ASA Section on Statistics and the Environment. In 2017, he got the ASA Outstanding Application Award,followed by George W. Snedecor Award from the Committee of Presidents of Statistical Societies (COPSS) in 2019. Some of the books written by him are Hierarchical Modeling and Analysis for Spatial Data, Linear Algebra and Matrix Analysis for Statistics and Handbook of Spatial Epidemiology published by Chapman and Hall/CRC

Prof. Elena G. Popkova – Doctor of Science (Economics), the founder and president of the Institute of Scientific Communications (Russia) and Leading researcher of the Center for applied research of the chair “Economic policy and public-private partnership” of Moscow State Institute of International Relations (MGIMO) (Moscow, Russia). Her scientific interests include the theory of economic growth, sustainable development, globalization, humanization of economic growth, emerging markets, social entrepreneurship, and the digital economy and Industry 4.0. Elena G. Popkova organizes Russian and international scientific and practical conferences and is the editor and author of collective monographs, and serves as a guest editor of international scientific journals. She has published more than 300 works in Russian and foreign peer-reviewed scientific journals and books.

Manas Chatterji is Professor of Management and Adjunct Professor in Economics and the Asian and Asian-American Studies Program at Binghamton University, State University of New York and Guest Professor, Peking University, Visiting Professor, Central University of Finance and Economics, Distinguished Professor in Poznan University, Poland. He also served as a Richard P. Nathan Fellow in Public Policy at Rockefeller Institute of Government, SUNY. He is a Distinguished Fellow in the Program in Political Psychology and Decision Making (POP-DM) at Lauder School of Government, Diplomacy and Strategy, Israel. He was also an Honorary Distinguished Professor at Indian Institute of Management-Calcutta, India and George Mason University, U.S. He is an elected member of Polish Academy of Science – Committee on Regional Planning. Professor Chatterji is currently a fellow of the international organization Economists for Peace and Security. He previously taught at the Wharton School at the University of Pennsylvania and has held visiting appointments at Cornell University, Erasmus University, University of Karlsruhe, University of Munster and many other universities in the United States, Europe, Asia and South Africa. He established the Mahatma Gandhi International Research Center on Conflict Prevention and Management in Bangalore, India. Organized the several events in the past.

He has organized international meetings on Peace Science, Disaster Management, Health Care, Technology Management, Disaster Management, etc. in many countries including Japan, China and Russia. During his career, he has edited three journals and serves on editorial boards of many others. Presently, he is the coeditor of International Studies of Peace Economics and Peace Science published by Cambridge Scholars, UK. He is also the General Editor of a book series on Contributions to Conflict Management, Peace Economics and Development published by Emerald Publishing Company, UK. Twenty-seven volumes in this series have been published and two more are forthcoming. He has authored/edited more than thirty books and published about 80 scholarly articles in the areas of Peace Science, Military Spending, Disarmament, Economic Conversion, Conflict Management, Regional Science, Technology Management, Health Care Management, Energy, Environmental and Urban Management.